Forced exile, diasporic conditions, violent death, dispossession the aftermath of genocide, sexual violence and femicide are historical conditions that raise complex questions for curatorial labour at the intersection of history, art, and activism.

Using as example the War & Women’s Human Rights Museum in Seoul, Korea, the account of my museum visit seeks to work toward extended histories in curating. This museum has to be understood in the context of sites of trauma in memory work and mourning. Mourning is a way of expressing grief. Can curating be an expression of grief? How can there be public mourning beyond those related to the mourned subjects by kinship relations or group affinities? In what ways are politics of identification and belonging addressed at the intersections of history, art, and activism in curating?

The War & Women’s Human Rights Museum museum is dedicated to the memory of the women who were victims of sexual slavery during World War II. In the museum, we see architectural drawings of the military brothels where the women were forced to work; we see photographs of trains transporting abducted women; we see precarious homes where comfort women struggled for survival after the war; we see the public space in front of Seoul’s Japanese embassy, the site of comfort women’s activism for more than 25 years.

We will examine questions that have been raised in genocide scholarship, Black diaspora studies, and feminist theory of trauma to see interconnectedness and difference between different sites of trauma and their respective mourning practices as they matter to contemporary curating. Connecting sites of trauma, understanding them in relation to each other, can become a method to translate across specific contexts counteracting knowledge silos for extended histories in curating to emerge. 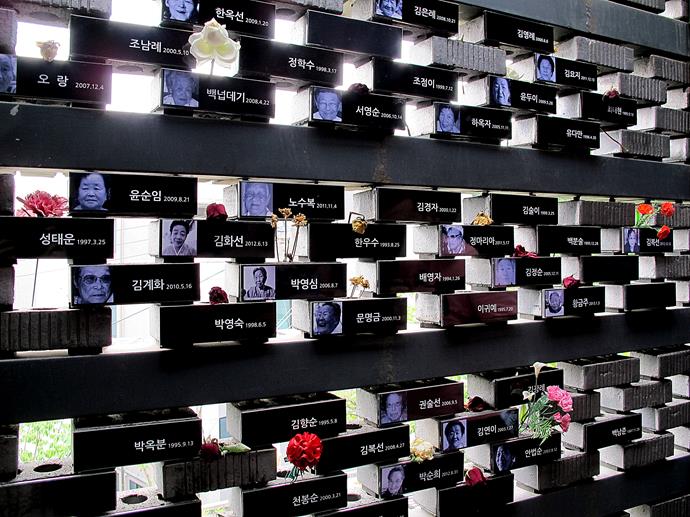 Elke Krasny is Professor for Art and Education at the Academy of Fine Arts Vienna. She is a cultural theorist, urban researcher, and curator. Her scholarship and her curatorial work focus on critical practices in architecture, urbanism, and contemporary art addressing the interconnectedness of ecology, economy, labor, memory, and feminisms. Together with colleagues Lara Perry and Dorothee Richter she is convening an international series of symposia on feminist curating since 2016. She was Visiting Curator at the Hongkong Community Museum Project in 2011 and Visiting Scholar at the Canadian Centre for Achitecture in Montréal in 2012. Her 2011 curatorial project Mapping the Everyday: Neighborhood Claims for the Future with the Downtown  Eastside Women Centre and the Audain Gallery Vancouver addressed women’s, housing and indigenous rights and resistance against poverty and sexual violence. Her exhibition Hands-on Urbanism. The Right to Green presented a global perspective on histories of informal urbanization through the lens of urban farming and gardening with its subsistence economies and was shown at the 2012 Venice Biennale of Architecture. Her exhibition Suzanne Lacy’s International Dinner Party in Feminist Curatorial Thought was shown at the University of the Arts Zurich in 2015 and the Royal Institute of Technology in Stockholm in 2016

Professor Krasny is the author and editor of numerous books and essays. Edited volumes include Critical Care. Architecture and Urbanism for a Broken Planet with Angelika Fitz (MIT Press, 2019), In Reserve! The Household with Regina Bittner (Spector Books, 2016), and Curating in Feminist Thought (2016), a special issue of the journal OnCurating edited together with Lara Perry and Dorothee Richter. 2019 essays include: Vienna. Immmigrant City. In City of Comings and Goings, edited by Crimson Historians and Urbanists and Curating without Borders. Transnational Feminist and Queer Feminist Practices for the 21st Century. In A Companion toMuseum Curation, edited by Brad Buckley and John Conomos.